Fundraising In memory of Edmundo Tapaoan 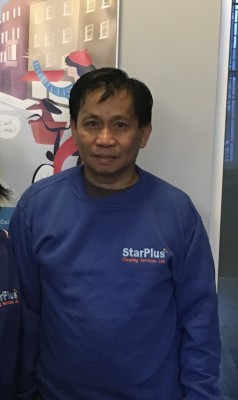 It is with great sadness and regret to inform all friends, family and Starplus colleagues of the tragic passing of our beloved Edmundo Tapaoan. I dedicate this Fundraising in his memory and to raise funds in support of Edmundo’s funeral, a memorial to him and to support Edmundo’s wife Maria and their 14 and 12 years old children both living in Philippines, his daughter has serious kidney problems and she is constantly in and out of the hospital in Philippines, Edmundo was working very hard to pay her 3 times a day dialysis in Philippines, yesterday I found out that they had to apply for loans here in UK to pay their young daughter hospital treatments  in Philippines, which are very expensive there, now without Edmundo,  Maria will not be able to afford those treatments , Maria will need our support , comfort and courage to help her facing the days ahead. Edmundo’s life was tragically ended far too soon at the age of 56, he and his wife Maria tested positive for Covid on Tuesday 12th January, both of them had mild symptoms only, they could not believe the test result because they were at home all the time, they were always with face masks, following the Covid rules, they were not at work, their site has been closed since the new year due to the new lockdown measures , on Wednesday I spoke to them in the morning and Edmundo only had mild symptoms and he told me that he was ok but in the evening at 7pm Maria contacted me to help her to get an ambulance asap because Edmundo could not breath properly , the emergency services arrived at their house 4 minutes after, the Emergency services tried everything, they have done their best but unfortunately his heart stop working, the emergency services could not confirm if his death was related to Covid or something to do with his heart, we will have to wait for the autopsy result,  his life ended on his own house with his wife next to him.  His wife Maria could not receive any direct support from her friends or family during the past two days because she was infected too, she was alone all this time at home, her friends, family and I  tried to support her with phone calls and providing her food but as we all know it’s not the same when you lose a loved one, she deserves all our support. Edmundo was a gentle giant, a man of morals and integrity. He had a heart of gold and always wished the best for everyone. He was kind hearted, considerate, warm and loving and didn’t have a bad bone in his body just such a huge personality and a great employee, all of us will miss Edmundo. Edmundo was particularly passionate about the people he loved around him and always gave his time selflessly to all those who knew him so well. Any contribution would be greatly appreciated, please use this link  Fundraiser for MARIA TAPAOAN by Sergio Dionisio : In memory of Edmundo Tapaoan (gofundme.com)

Starplus have been our cleaning company for over 11 years. Their service is impeccable and I would highly recommend them to any other business with high standards like ours.

Starplus Cleaning Services Ltd has provided us with a good reliable and friendly service for sometime. Originally this company was recommended to me by a client. I was very impressed with the high level of service they provide. They always provide an amazing job. Well done

Our company has been using STARPLUS for over 9 years now, they always provide a great service and trustworthy, reliable cleaners.